Splendor, Decline, and Rediscovery of Yiddish in Latin America by Malena Chinski and Alan Astro 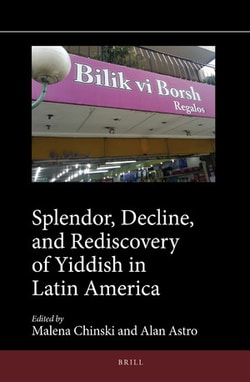 Splendor, Decline, and Rediscovery of Yiddish in Latin America presents Yiddish culture as it developed in an area seldom associated with the language. Yet several countries—Argentina, Brazil, Cuba, Mexico and Uruguay—became centers for Yiddish literature, journalism, political activism, theater, and music. Chapters by historians, linguists, and literary critics explore the flourishing of Yiddish there in the early 20th century, its retraction in the 1960’s, and contemporary endeavors to rescue this marginalized legacy.

Topics discussed in the volume include the literary figures of the “Jewish gaucho” and the peddler; the regional Yiddish press; the communal struggle against trafficking in women; cultural responses to the Holocaust; intra-Jewish conflict during the Cold War; debates on assimilation versus tradition; and emergent postvernacular Yiddish.