The Dual Truth: Studies on Nineteenth-Century Modern Religious Thought and Its Influence on Twentieth-Century Jewish Philosophy by Ephraim Chamiel 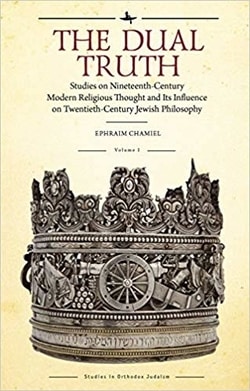 This book explores three schools of fascinating, talented, and gifted scholars whose philosophies assimilated the Jewish and secular cultures of their respective homelands: they include halakhists from Rabbi Ettlinger to Rabbi Eliezer Berkowitz; Jewish philosophers from Isaac Bernays to Yeshayau Leibowitz; and biblical commentators such as Samuel David Luzzatto and Rabbi Umberto Cassuto.

Running like a thread through their philosophies is the attempt to reconcile the Jewish belief in revelation with Western culture, Western philosophy, and the conclusions of scientific research. Among these attempts is Luzzatto’s “dual truth” approach.

The Dual Truth is the sequel to the Ephraim Chamiel’s previous book The Middle Way, which focused on the challenges faced by members of the “Middle Trend” in nineteenth-century Jewish thought.