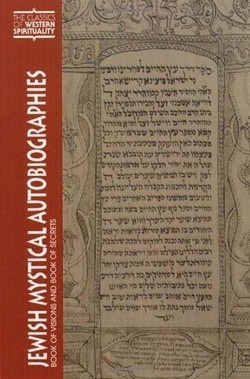 In this remarkable volume in the Classics of Western Spirituality are the mystical autobiographies-unusual in themselves for the Jewish tradition-of two influential Jewish thinkers, Rabbi Hayyim Vital and Rabbi Yizhak Isaac Safrin of Komarno. Now translated for the first time in English, these texts will capture the attention of historians, theologians, and anyone studying Judaism.
Rabbi Hayyim Vital (1542-1620) was the foremost disciple of R. Isaac Luria, one of the most important mystics in 16th century Judaism and founder of the major school of mysticism known as Lurianic kabbalah. Vital was the most influential transmitter of Luria’s teachings, and the author of a full-fledged mystical autobiography called The Book of Visions. Vital saw himself as the reincarnation of many of the important figures in Jewish history associated with messianic hopes and expectations.

The second text in this volume, The Book of Secrets, is by Rabbi Yizak Isaac Safrim of Komarno (1806-1874), an important Hasidic master. Like Vital, he saw himself as a potential messianic figure who had direct access to the mysteries of heaven. The Book of Secrets is divided into two parts. The first part, The Book of Visions, modeled on Vital’s work, consists of incidents in his life and visionary experiences. The second part, the Deeds of the Lord, contains stories about the Baal Shem Tov, the founder of Hasidism.