Kafka and Kabbalah by Karl-Erich Grozinger 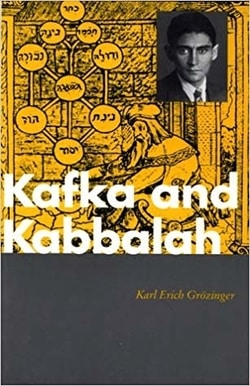 Is a study of Kafka’s thinking and writing from strictly a religious point of view justified? He is, after all, considered one of the pillars of modernism. As such, Kafka’s well-established deploring of the inadequacy of his own Jewish upbringing only fuels the generally held belief that he was not much influenced by his religion. Or does it?

This compelling book considers the writer from a very different point of view. In jargon-free language, Judaist Karl Erich Grozinger reveals that Kafka actually had an extraordinarily detailed and sophisticated knowledge of Judaismparticularly of the Kabbalah and kabbalistic tradition. Working from the earlier critical writings of Gershom Scholem, Professor Grozinger shows that these influences can be found in all of Kafka’s texts: his novels and short stories; but, especially, in his diary entries and aphorisms.

In fact, the essence of what we have come to call Kafkaesque has its origins and foundations primarily in the Kabbalah. This ranges from the kabbalistic tradition of the gatekeeper in The Trial to Joseph K. and the surveyor in The Castle, men who try their hands at theurgy in order to intervene in the divine direction of life events. In one of Kafka’s most famous stories, Josephine the Singer plays the role of the rebbe, or tzaddik: the person who takes on the role of theurgist (or intercessor) for the community.

Kafka’s work has been subjected to many radically different interpretations ever since critics discovered it. Above all, the influence of Jewish theology – ideas of judgment and sin, atonement and justification – on Kafka’s writings, as seen through the lens of kabbalistic-Eastern Jewish and Yiddish traditions, adds an important dimension to our understanding of this enigmatic and fascinating author.