Philosophy and Kabbalah: Elijah Benamozegh and the Reconciliation of Western Thought and Jewish Esotericism by Alessandro Guetta and Helena Kahan 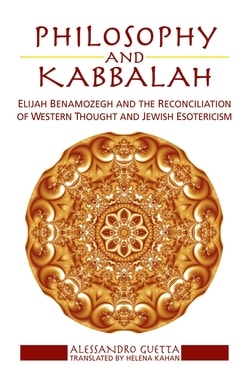 Philosophy and Kabbalah offers an analysis of the life and work of Elijah Benamozegh (1823–1900), an Italian Kabbalist and philosopher of Moroccan origins. Although the relationship between Kabbalah and philosophy has always been problematic, Benamozegh considered Kabbalah to be the true dogmatic and rational tradition of Judaism. In his numerous books and articles in Hebrew, Italian, and French, he constantly integrated this Jewish esoteric tradition into the currents of Western European philosophy, particularly Hegelian idealism and positivism, as well as the philosophy of the unconscious that would later develop into psychoanalysis. Benamozegh’s inspired reading of Spinoza, his grand project of a universal religion, his “feminization” of Jewish thought, and his ability to excel simultaneously as a rabbi, an Italian patriot, a citizen of the République des Lettres, and a proud representative of an ancient Sephardic culture make him one of the most outstanding and original figures of the nineteenth-century Jewish culture.