The Siege of Tel Aviv by Hesh Kestin 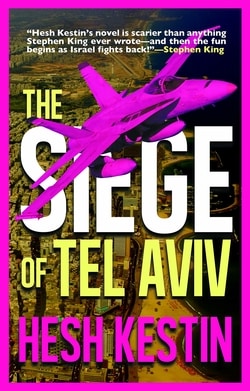 Stephen King calls Hesh Kestin’s The Siege of Tel Aviv “scarier than anything Stephen King ever wrote.” Iran leads five armies in a brutal victory over Israel, which ceases to exist. Within hours, its leaders are rounded up and murdered, the IDF is routed, and the country’s six million Jews concentrated in Tel Aviv, which becomes a starving ghetto. While the US and the West sit by, Israel’s enemies prepare to kill off the entire population.

On the eve of genocide, Tel Aviv makes one last attempt to save itself, as an Israeli businessman, a gangster, and a cross-dressing fighter pilot put together a daring plan to counterattack. Will it succeed?