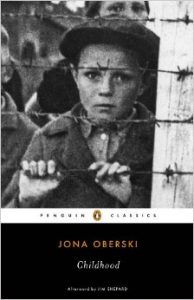 Told from the perspective of a child slowly awakening to the atrocities surrounding him, Childhood is a searing story of the Holocaust that no reader will soon forget. As five-year-old Jona waits with his mother and father to emigrate from Nazi-occupied Amsterdam to Palestine, they are awakened at night, put on a train, and eventually interred in the camps at Bergen-Belsen. There, what at first seems to be a merely dreary existence soon reveals itself to be one of the worst horrors humanity has ever created.