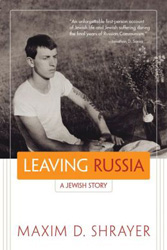 A memoir of coming of age and struggling to leave the USSR. Shrayer chronicles the triumphs and humiliations of a Soviet childhood and expresses the dreams and fears of a Jewish family that never gave up its hopes for a better life. Narrated in the tradition of Tolstoy’s confessional trilogy and Nabokov’s autobiography, this is a searing account of the KGB’s persecution of refuseniks, a poet’s rebellion against totalitarian culture, and Soviet fantasies of the West during the Cold War.