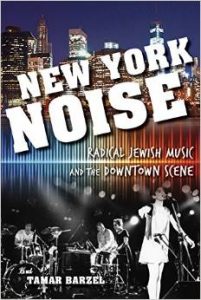 Coined in 1992 by composer/saxophonist John Zorn, “Radical Jewish Culture,” or RJC, became the banner under which many artists in Zorn’s circle performed, produced, and circulated their music. New York’s downtown music scene, part of the once-grungy Lower East Side, has long been the site of cultural innovation. It is within this environment that Zorn and his circle sought to combine, as a form of social and cultural critique, the unconventional, uncategorizable nature of downtown music with sounds that were recognizably Jewish. Out of this movement arose bands, like Hasidic New Wave and Hanukkah Bush, whose eclectic styles encompassed neo-klezmer, hardcore and acid rock, neo-Yiddish cabaret, free verse, free jazz, and electronica. Though relatively fleeting in rock history, the “RJC moment” produced a six-year burst of conversations, writing, and music—including festivals, international concerts, and nearly two hundred new recordings. During a decade of research, Tamar Barzel became a frequent visitor at clubs, post-club hangouts, musicians’ dining rooms, coffee shops, and archives. Her book describes the way RJC forged a new vision of Jewish identity in the contemporary world, one that sought to restore the bond between past and present, to interrogate the limits of racial and gender categories, and to display the tensions between secularism and observance, traditional values and contemporary concerns.

Based on years of field study, interviews, and participation in the downtown scene about which she writes, Tamar Barzel presents a scholarly and often highly technical account of the emergence of what she calls “a radical Jewish culture” moment among musicians on New York’s Lower East Side in the late 1980s and early 1990s. At this time, artists like John Zorn, Sharon Topper, Anthony Coleman, and Shelley Hirsch began to express their Jewish heritage and identities through their compositions and performance pieces. Their “moment” reached its apogee in the Radical Jewish Cultural Festival organized by John Zorn, in of all places, Munich, Germany, in 1992 and then mounted closer to home at the group’s unofficial headquarters, the Knitting Factory.