The Rag Race: How Jews Sewed Their Way to Success in America and the British Empire by Adam D. Mendelsohn 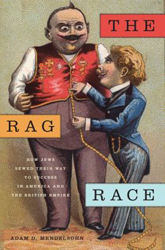 In this fascinating book Adam D. Mendelsohn paints a vivid picture of how “rag picking” in nineteenth-century England and the United States served as the springboard for Jews to enter the middle and upper classes. Dealing in secondhand clothes provided a perfect Jewish “ethnic niche.” It was an aspect of the garment industry that provided few occupational barriers. Little cash was needed to open a stall or store, and none for scouring the street. The stigma of the work made it unappealing and reduced the number of competitors. Itinerant collectors bought, begged, and bartered to get clothing which in turn was cleaned, repaired, and sold or repurposed into totally new items such as bonnets, cloaks, and aprons. In London, there was far more secondhand clothing available and a greater demand for inexpensive clothes, leading to the development of an elaborate system of trade of castoff clothing. In 1843, “The Clothing Exchange” was established and drew over ten thousand people on Sunday, the busiest day. There were one to two thousand Jewish collectors walking the streets of London collecting old clothes to resell or repurpose. This elaborate secondhand clothing business schooled Jewish garment entrepreneurs with the production and marketing skills they would later need as manufacturers and retailers of new clothes.