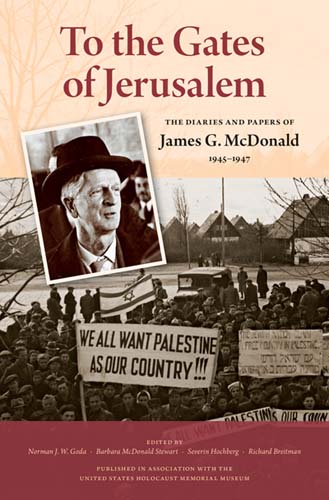 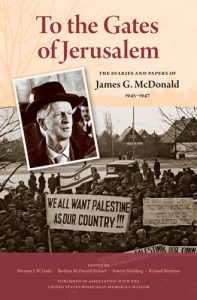 The book at Amazon and

This volume, the third in a series of James G. McDonald’s edited diaries and papers, covers his work from 1945, with the formation of the Anglo-American Committee, through 1947, with the United Nations’ decision to partition Palestine between Jews and Arabs. The “Anglo-American Committee of Inquiry Regarding the Problems of European Jewry and Palestine” was a group charged with finding a solution to the problem of European Jewish Refugees in the context of the increasingly unstable British Mandate in Palestine. McDonald’s diaries and papers offer the most thorough personal account we have of the Committee and the politics surrounding it. His diary is part travelogue through the desolation of postwar Europe and a Middle East being transformed by new Jewish settlements and growing Arab intransigence. McDonald maintained discreet contact with Zionist and moderate Arab leaders throughout the Committee’s hearings and deliberations. He was instrumental in the recommendation that 100,000 Jewish refugees enter Palestine and won President Truman’s trust in order to counter attempts to nullify the report’s recommendations.

The book’s page at the publisher ( Save 30% by using code WMG3XX at www.iupress.indiana.edu. )