Jewish Mad Men: Advertising and the Design of the American Jewish Experience by Kerri P. Steinberg 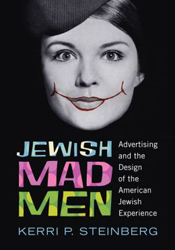 It is easy to dismiss advertising as simply the background chatter of modern life, often annoying, sometimes hilarious, and ultimately meaningless. But Kerri P. Steinberg argues that a careful study of the history of advertising can reveal a wealth of insight into a culture. In Jewish Mad Men, Steinberg looks specifically at how advertising helped shape the evolution of American Jewish life and culture over the past one hundred years.

Drawing on case studies of famous advertising campaigns—from Levy’s Rye Bread (“You don’t have to be Jewish to love Levy’s”) to Hebrew National hot dogs (“We answer to a higher authority”)—Steinberg examines advertisements from the late nineteenth-century in New York, the center of advertising in the United States, to trace changes in Jewish life there and across the entire country. She looks at ads aimed at the immigrant population, at suburbanites in midcentury, and at hipster and post-denominational Jews today.