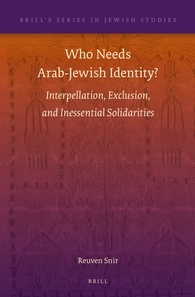 In Who Needs Arab-Jewish Identity?: Interpellation, Exclusion, and Inessential Solidarities, Professor Reuven Snir, Dean of Humanities at Haifa University, presents a new approach to the study of Arab-Jewish identity and the subjectivities of Arabized Jews. Against the historical background of Arab-Jewish culture and in light of identity theory, Snir shows how the exclusion that the Arabized Jews had experienced, both in their mother countries and then in Israel, led to the fragmentation of their original identities and encouraged them to find refuge in inessential solidarities. Following double exclusion, intense globalization, and contemporary fluidity of identities, singularity, not identity, has become the major war cry among Arabized Jews during the last decade in our present liquid society.