Warsaw. The Jewish Metropolis: Essays in Honor of the 75th Birthday of Professor Antony Polonsky 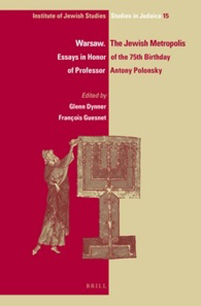 Warsaw was once home to the largest and most diverse Jewish community in the world. It was a center of rich varieties of Orthodox Judaism, Jewish Socialism, Diaspora Nationalism, Zionism, and Polonization. This volume is the first to reflect on the entire history of the Warsaw Jewish community, from its inception in the late 18th century to its emergence as a Jewish metropolis within a few generations, to its destruction during the German occupation and tentative re-emergence in the postwar period. The highly original contributions collected here investigate Warsaw Jewry’s religious and cultural life, press and publications, political life, and relations with the surrounding Polish society. This monumental volume is dedicated to Professor Antony Polonsky, chief historian of the new Warsaw Museum for the History of Polish Jews, on the occasion of his 75th birthday.