Ally: My Journey Across the American-Israeli Divide by Michael B. Oren 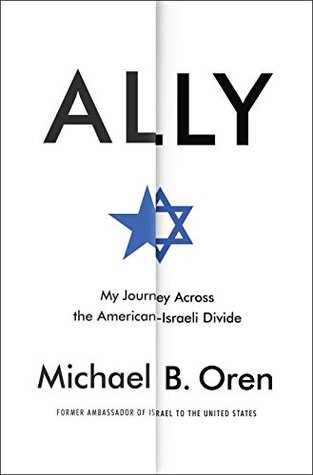 Michael Oren served as the Israeli ambassador to the United States from 2009 to 2013. An American by birth and a historian by training, Oren arrived at his diplomatic post just as Benjamin Netanyahu, Barack Obama, and Hillary Clinton assumed office. During Oren’s tenure in office, Israel and America grappled with the Palestinian peace process, the Arab Spring, and existential threats to Israel posed by international terrorism and the Iranian nuclear program. Forged in the Truman administration, America’s alliance with Israel was subjected to enormous strains, and its future was questioned by commentators in both countries. On more than one occasion, the friendship’s very fabric seemed close to unraveling.

Ally is the story of that enduring alliance—and of its divides—written from the perspective of a man who treasures his American identity while proudly serving the Jewish State he has come to call home.