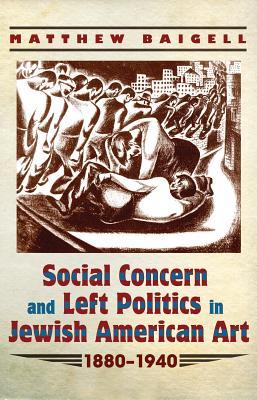 Beginning in the 1880s, radical causes increasingly attracted Jewish activists and thinkers, creating a substantial Jewish-American world of writers and artists. Most of the artists that author Matthew Baigell highlights emerged from this forty-year flood of immigrants into the United States at the turn of the twentieth century. The final 25-page chapter includes artists born in the 1950s as well as critics’ observations that appeared in 1999.

A continuous trove of sources—newspapers, magazines, tracts, flyers, and postcards, nearly all in Yiddish—form a large portion of his material. Lending themselves well to black-and-white reproduction dating from 1894, the book’s sixty-one illustrations accompany the relevant text. Many of these include socialist illustrations, often exemplars of Art Deco. The glossary, however, is scant for readers not fluent in Yiddish. The artists’ biographies predictably indicate their preponderant emigration from Russia and Poland, feeding our history’s great population surge.