The Man Who Stalked Einstein: How Nazi Scientist Philipp Lenard Changed the Course of History by Bruce J. Hillman 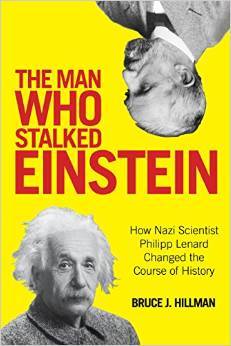 The Man Who Stalked Einstein tells the little-known story of the antagonistic relationship between Albert Einstein and German physicist Phillip Lenard. Both men were German-born, brilliant scientists, Nobel Prize winners, and idealists. But their ideals were diametrically opposed to one another, and their scholastic rivalry escalated into personal animosity.

Lenard was an experimentalist, and developed some of the earliest instruments for producing X-rays. Einstein was a theorist, a man who performed his famous experiments with time and space in his mind. Lenard believed deeply that space was filled with a material, an “ether” through which electromagnetic waves traveled. Einstein unified space and time, giving rise to the idea that those same waves traveled with relative speed.