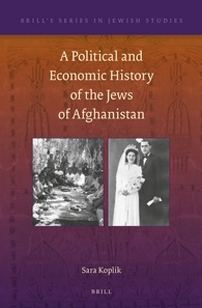 A Political and Economic History of the Jews of Afghanistan by Sara Koplik describes the situation of Jews in that country during the nineteenth and twentieth centuries, particularly 1839-1952. It examines the political, economic and social conditions they faced as religious minorities. The work focuses upon harsh governmental economic policies of the 1930s and 1940s spearheaded by ‘Abd al-Majid Khan Zabuli which caused the impoverishment and suffering of both the local community and refugees from Soviet Central Asia. The question of Nazi influence in Afghanistan is addressed, with the author arguing that it was mainly limited to the economic sphere. An examination of the appeal of Zionism and the community’s immigration to Israel is included.