Landscapes of Memory and Impunity: The Aftermath of the AMIA Bombing in Jewish Argentina 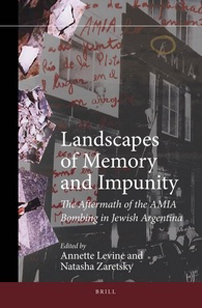 Landscapes of Memory and Impunity chronicles the aftermath of the most significant terrorist attack in Argentina’s history—the 1994 AMIA bombing that killed eighty-five people, wounded hundreds, and destroyed the primary Jewish mutual aid society. This volume, edited by Annette H. Levine and Natasha Zaretsky, presents the first comprehensive, multidisciplinary work about this decisive turning point in Jewish Argentine history—examining the ongoing impact of this violence and the impunity that followed. Chapters explore political protest movements, musical performance, literature, and acts of commemoration. They emphasize the intersecting themes of memory, narrative and representation, Jewish belonging, citizenship, and justice—critical fault lines that frame Jewish life after the AMIA attack, while also resonating with historical struggles for pluralism in Argentina.