The Salt Mine: The Trail of Nazi Blood Money by Patrick Nolan Clark 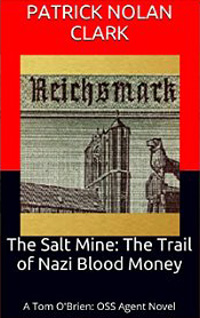 OSS intelligence officer Tom O’Brien becomes obsessed in the search for a French war criminal who’d tortured his friend, a French agent working behind the German lines. Parachuted into southern France to search for the agent, O’Brien stumbles onto a well organized Nazi scheme to put stolen wealth away for the post-war period. While the Office of Strategic Services tries to figure out if the Nazis are preparing to use their plunder to resist or flee at the end of the war, the trail leads Tom to Switzerland, Paris, and finally into Germany. As O’Brien follows General Patton’s troops into Germany, it all comes to a head as the European war draws to a close. Going a half mile below ground into a salt mine in central Germany, O’Brien hits the mother lode of Nazi wealth. Now he needs to find the Frenchman that tortured his friend before the man escapes into the chaos of post-war Europe. O’Brien wants justice, but he might have to settle for vengeance.

Along the way, O’Brien brushes shoulders with SS men, Monuments Men, US Treasury officials, Soviet officers, and ordinary GIs. The action swirls from the French Riviera to a Bavarian castle in this tale of World War II intelligence operations by America’s Office of Strategic Services.