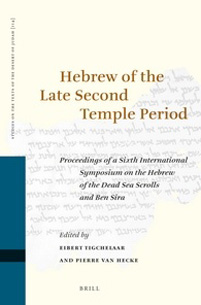 Proceedings of a Sixth International Symposium on the Hebrew of the Dead Sea Scrolls and Ben Sira
Edited by Eibert Tigchelaar, K.U. Leuven and Pierre Van Hecke K.U. Leuven, with the assistance of Seth Bledsoe and Pieter B. Hartog

The Hebrew of the Late Second Temple Period is directly attested in the Scrolls from Qumran and other manuscripts discovered in the Judaean Desert. Indirectly, it is also found in some manuscripts copied in later times, which still preserve linguistic elements of the Hebrew from the period in which the texts were authored. Often referred to as the Hebrew of the Dead Sea Scrolls or Qumran Hebrew, and positioned chronologically between Biblical Hebrew and Mishnaic Hebrew, its nature remains disputed. Some essays in this volume deal with linguistic and philological problems of this Late Second Temple Period Hebrew. Other papers discuss the nature and linguistic profile of the Hebrew of the Dead Sea Scrolls.