Killing a King: The Assassination of Yitzhak Rabin and the Remaking of Israel by Dan Ephron 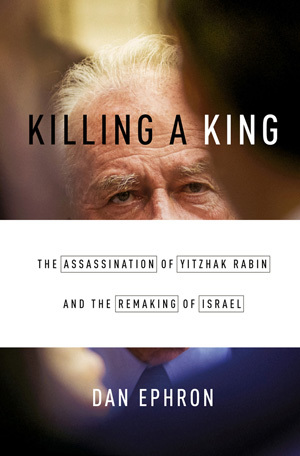 The assassination of Israeli Prime Minister Yitzhak Rabin by Orthodox Jew Yigal Amir twenty years ago this November remains the single most consequential event in the country’s recent history. Killing a King relates the parallel stories of Rabin and Amir over the two years leading up to the assassination, as one of them plotted political deals he hoped would lead to peace and the other plotted murder. This deeply reported narrative is based on a trove of documents from the era and interviews with all of the key players, including members of the assassin’s family. Only through the prism of the murder is it possible to understand Israel today, from the paralysis in peacemaking to the fraught relationship between Netanyahu and Obama. Dan Ephron, who served as the Jerusalem bureau chief for Newsweek Magazine, covered both the rally where Rabin was assassinated and the subsequent murder trial.