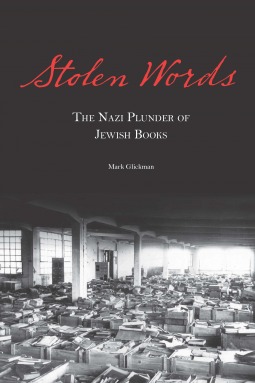 Stolen Words is an epic story about the largest collection of Jewish books in the world—tens of millions of books that the Nazis looted from European Jewish families and institutions. Nazi soldiers and civilians emptied Jewish communal libraries, confiscated volumes from government collections, and stole from Jewish individuals, schools, and synagogues. Early in their regime the Nazis burned some books in spectacular bonfires, but most they saved, stashing the literary loot in castles, abandoned mine shafts, and warehouses throughout Europe. It was the largest and most extensive book-looting campaign in history.

After the war, Allied forces discovered these troves of stolen books but quickly found themselves facing a barrage of questions. How could the books be identified? Where should they go? Who had the authority to make such decisions? Eventually the military turned the books over to an organization of leading Jewish scholars called Jewish Cultural Reconstruction, Inc.—whose chairman was the acclaimed historian Salo Baron and whose on-the-ground director was the philosopher Hannah Arendt—with the charge to establish restitution protocols.

Stolen Words is the story of how a free civilization decides what to do with the material remains of a world torn asunder, and how those remains connect survivors with their past. It is the story of Jews struggling to understand the new realities of their post-Holocaust world and of Western society’s gradual realization of the magnitude of devastation wrought by World War II. Most of all, it is the story of people —of Nazi leaders, ideologues, and Judaica experts; of Allied soldiers, scholars, and scoundrels; and of Jewish communities, librarians, and readers around the world.