Something Is Rotten in Fettig by Jere Krakoff 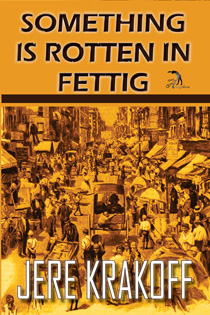 Told in a wry, understated voice, the novel satirizes the travails of Leopold Plotkin, a failing kosher butcher with a pathological aversion to conflict. After Plotkin commits an act that ignites a crisis in his Republic, he is propelled into conflicts with every branch of government. When he refuses the government’s demands to undo what he did, he is indicted by a Secret Blind Jury, arrested by the National Constabulary, and consigned to the notorious Purgatory House of Detention, where he languishes next to a defrocked insane lawyer whose nocturnal machinations threaten to drive him crazy. After months of languishing in prison, Plotkin is prosecuted by the Republic’s ethically-challenged Prosecutor General, tried before a congenitally pro-prosecution judge, and defended by a reclusive lawyer who has never been in a courtroom. The butcher’s only witness in the highly anticipated trial is an unhinged resident of the Warehouse for the Purportedly Insane. Everybody, including Plotkin and his small circle of supporters, expects a conviction and imposition of the longest sentence allowed by law, if not longer.