Jewish Books and their Readers (edited) by Scott Mandelbrote 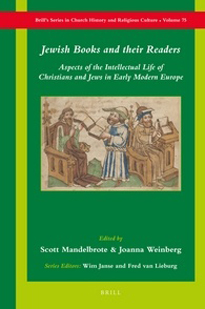 “Jewish Books and their Readers” discusses the transformative effect of the circulation and readership of sacred and secular texts written by Jews on Christian as well as Jewish readers in early modern Europe. Its twelve essays challenge traditional paradigms of Christian Hebraism and undermine simplistic visions of the unchanging nature of Jewish cultural life. They ask what constituted a Jewish book: how it was presented, disseminated, and understood within both Jewish and Christian environments (and how its meanings were contested), and what effect such understanding had on contemporary views of Jews and their intellectual heritage. They demonstrate how the involvement of Christians in the production and dissemination of Jewish books played a role in the shaping of the intellectual life of Jews and Christians. Contributors are: Michela Andreatta, Andrew Berns, Theodor Dunkelgrun, Federica Francesconi, Anthony Grafton Alessandro Guetta, William Horbury, Yosef Kaplan, Scott Mandelbrote, Piet van Boxel, Joanna Weinberg Benjamin Williams.