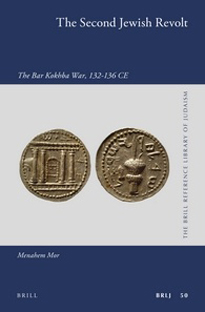 In “The Second Jewish Revolt: The Bar Kokhba War, 132-136 C.E.,” Menahem Mor offers a detailed account on the Bar Kokhba Revolt in an attempt to understand the second revolt against the Romans. Since the Bar Kokhba Revolt did not have a historian who devoted a comprehensive book to the event, Mor used a variety of historical materials including literary sources (Jewish, Christian, Greek and Latin) and archaeological sources (inscriptions, coins, military diplomas, hideouts, and refuge complexes). The book reviews the causes for the outbreak while explaining the complexity of the territorial expansion of the Revolt. Mor portrays the participants and opponents as well as the attitudes of the non-Jewish population in Palestine. He exposes the Roman Army’s part in Judaea, the Jewish leadership and the implications of the Revolt.