Drawing the Iron Curtain: Jews and the Golden Age of Soviet Animation by Maya Balakirsky Katz 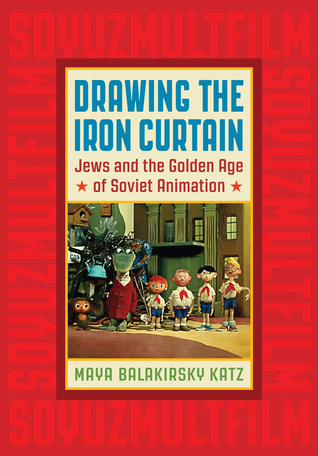 In the American imagination, the Soviet Union was a drab cultural wasteland, a place where playful creative work and individualism was heavily regulated and censored. Yet despite state control, some cultural industries flourished in the Soviet era, including animation. Drawing the Iron Curtain tells the story of the golden age of Soviet animation and the Jewish artists who enabled it to thrive.

Art historian Maya Balakirsky Katz reveals how the state-run animation studio Soyuzmultfilm brought together Jewish creative personnel from every corner of the Soviet Union and served as an unlikely haven for dissidents who were banned from working in other industries. Surveying a wide range of Soviet animation produced between 1919 and 1989, from cutting-edge art films like Tale of Tales to cartoons featuring “Soviet Mickey Mouse” Cheburashka, she finds that these works played a key role in articulating a cosmopolitan sensibility and a multicultural vision for the Soviet Union. Furthermore, she considers how Jewish filmmakers used animation to depict distinctive elements of their heritage and ethnic identity, whether producing films about the Holocaust or using fellow Jews as models for character drawings.

Providing a copiously illustrated introduction to many of Soyuzmultfilm’s key artistic achievements, while revealing the tumultuous social and political conditions in which these films were produced, Drawing the Iron Curtain has something to offer animation fans and students of Cold War history alike.