Jewish Magic before the Rise of Kabbalah by Yuval Harari 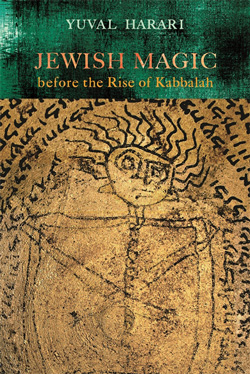 “Magic culture is certainly fascinating. But what is it? What, in fact, are magic writings, magic artifacts?” Originally published in Hebrew in 2010, Jewish Magic Before the Rise of Kabbalah is a comprehensive study of early Jewish magic focusing on three major topics: Jewish magic inventiveness, the conflict with the culture it reflects, and the scientific study of both.

The first part of the book analyzes the essence of magic in general and Jewish magic in particular. The book begins with theories addressing the relationship of magic and religion in fields like comparative study of religion, sociology of religion, history, and cultural anthropology, and considers the implications of the paradigm shift in the interdisciplinary understanding of magic for the study of Jewish magic. The second part of the book focuses on Jewish magic culture in late antiquity and in the early Islamic period. This section highlights the artifacts left behind by the magic practitioners-amulets, bowls, precious stones, and human skulls-as well as manuals that include hundreds of recipes. Jewish Magic before the Rise of Kabbalah also reports on the culture that is reflected in the magic evidence from the perspective of external non-magic contemporary Jewish sources.

Issues of magic and religion, magical mysticism, and magic and social power are dealt with in length in this thorough investigation. Scholars interested in early Jewish history and comparative religions will find great value in this text.