About the Night by Anat Talshir 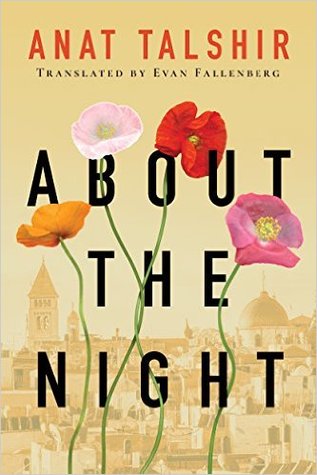 On a hot summer day in 1947, on a grandstand overlooking Jerusalem, Elias and Lila fall deeply, irrevocably in love.

Tragically, they come from two different worlds. Elias is a Christian Arab living on the eastern side of the newly divided city, and Lila is a Jew living on the western side. A growing conflict between their cultures casts a heavy shadow over the region and their burgeoning relationship. Between them lie not only a wall of stone and barbed wire but also the bitter enmity of two nations at war.

Told in the voice of Elias as he looks back upon the long years of his life, About the Night is a timely story of how hope can nourish us, loss can devastate us, and love can carry us beyond the boundaries that hold human beings apart.