The Crime of Complicity by Amos N. Guiora 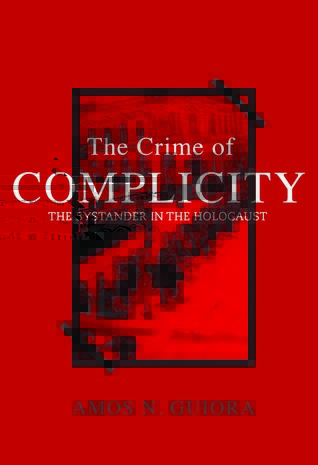 The Bystander in the Holocaust

If you are a bystander and witness a crime, should intervention to prevent that crime be a legal obligation? Or is moral responsibility enough?

In The Crime of Complicity, Amos N. Guiora addresses these profoundly important questions and the bystander-victim relationship from a deeply personal and legal perspective, focusing on the Holocaust and then exploring cases in contemporary society. Sharing the experiences of his parents, who were Holocaust survivors, and his grandparents, who did not survive, and drawing on a wide range of historical material and interviews, Guiora examines the bystander during three distinct events: death marches, the German occupation of Holland, and the German occupation of Hungary. He explains that while the Third Reich created policy, its implementation was dependent on bystander non-intervention.

Bringing the issue of intervention into current perspective, he examines sexual assault cases at Vanderbilt and Stanford Universities, as well as other crimes where bystanders chose whether or not to intervene, and the resulting consequences.

After examining the intensely personal example of his own parents’ survival of the Holocaust, Guiora asserts that a society cannot rely on morals and compassion alone in determining our obligation to help another in danger. It is ultimately, he concludes, a legal issue.

Should we make the obligation to intervene the law, and thus non-intervention a crime?