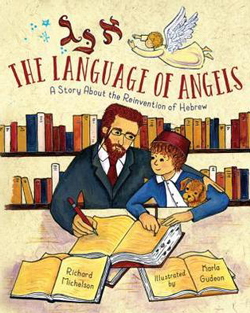 Winners of the annual Sydney Taylor Book Award were announced by the Association of Jewish Libraries today. Named in memory of Sydney Taylor, author of the classic All-of-a-Kind Family series, the award recognizes books for children and teens that exemplify high literary standards while authentically portraying the Jewish experience.

2018 is the 50th Anniversary of the Sydney Taylor Awards. The first winner was The Endless Steppe: Growing Up in Siberia by Esther Hautzig in 1968, published by the Thomas Y. Crowell Company.

The Language of Angels: A Story About the Reinvention of Hebrew by Richard Michelson, illustrated by Karla Gudeon, published by Charlesbridge, won the Sydney Taylor Book Award in the Younger Readers category. This beautiful picture book tells the story of how Hebrew became an everyday language in Israel, after being out of use for two thousand years. The folk art illustrations are an illuminating match.

Refugee by Alan Gratz, published by Scholastic Press, an imprint of Scholastic, won the Sydney Taylor Book Award in the Older Readers category. The journeys of three different young refugees from Nazi Germany, 1990s Cuba and present-day Syria come together to form an emotional and timely narrative about the refugee experience.

The Librarian of Auschwitz by Antonio Iturbe, translated by Lilit Thwaites, published by Godwin Books, an imprint of Henry Holt and Company, a division of Macmillan Children’s Publishing Group, won the Sydney Taylor Book Award in the Teen Readers category. This powerful story of Dita Kraus and her protection of a handful of books in the Auschwitz concentration camp shows the importance of hope in the darkest of times.

Harold Grinspoon and PJ Library won the Sydney Taylor Body of Work Award. PJ Library, a project of the Harold Grinspoon Foundation, is a family engagement program that sends free books celebrating Jewish values and culture to families with children 6 months through 8 years old. This program has revolutionized the field of Jewish children’s literature by providing dramatically improved access to Jewish books for families. It has also significantly increased the publication of children’s books with Jewish content. The Body of Work Award has been given twelve times in the 50-year history of the Sydney Taylor Awards. The last recipient was author Eric Kimmel in 2004.

For Older Readers, the Honor Books are: Viva, Rose! by Susan Krawitz, published by Holiday House, which was also the recipient of the 2015 Sydney Taylor Manuscript Award; This Is Just a Test by Madelyn Rosenberg and Wendy Wan-Long Shang, published by Scholastic Press, an imprint of Scholastic; and The Six-Day Hero by Tammar Stein, published by Kar-Ben Publishing, a division of Lerner Publishing Group.

For Teen Readers, the Honor Books are: To Look a Nazi in the Eye: A Teen’s Account of a War Criminal Trial by Kathy Kacer with Jordana Lebowitz, published by Second Story Press; Almost Autumn by Marianne Kaurin, translated by Rosie Hedger, published by Arthur A. Levine Books, an imprint of Scholastic; and The Girl with the Red Balloon by Katherine Locke, published by Albert Whitman & Company.

In addition to the medal winners, the Award Committee designated twelve Notable Books of Jewish Content for 2018. More information about the Sydney Taylor Book Award and a complete listing of the award winners and notables can be found at http://www.sydneytaylorbookawards.org

Winning authors and illustrators will receive their awards at the Annual Conference of the Association of Jewish Libraries, to be held in Boston, MA from June 18-20, 2018. Gold and silver medalists will also participate in a blog tour February 4-8, 2018. For more information about the blog tour please visit www.jewishlibraries.org/blog.

The Language of Angels and Refugee were also named winners of the 67th Annual National Jewish Book Awards, which were announced today as well. A full list of all the winners can be found on the Jewish Book Council’s website https://www.jewishbookcouncil.org/awards/national-jewish-book-award.html

Under the Sabbath Lamp by Michael Herman, illustrated by Alida Massari
published by Kar-Ben Publishing, a division of Lerner Publishing Group

Ruth Bader Ginsburg: The Case of R.B.G. vs. Inequality by Jonah Winter, illustrated by Stacy Innerst, published by Abrams Books for Young Readers, a division of Abrams

The Children of Willesden Lane: A True Story of Hope and Survival During World War II:
Young Readers Edition by Mona Golabek and Lee Cohen and adapted by Emil Sher
published by Little, Brown Books for Young Readers, a division of Hachette Book Group

The Dollmaker of Krakow by R.M. Romero
published by Delacorte Press, a division of Random House Children’s Books