Counting on America by Gary Reiner and Kurt Reiner 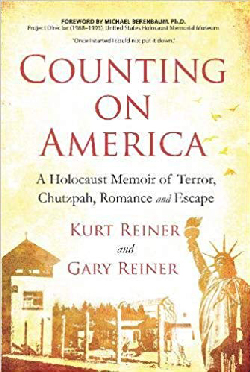 A Holocaust Memoir of Terror, Chutzpah, Romance and Escape

In July 1938, the young Austrian Kurt Reiner had everything to look forward to. A 25-year old Jewish engineering student at Vienna’s Technical College, he was newly married to Hennie, a beautiful 19-year old high school graduate skilled in multiple languages. But just four months later, on November 10, 1938, Kurt was arrested by the German Gestapo in what became known as Kristallnacht, or the “Night of Broken Glass” and sent to Dachau, the first concentration camp opened in Germany and one of the most brutal. To rescue her husband, Hennie courageously confronts a Gestapo agent, an act of bravado that is instrumental in securing his release from the camp. After landing for several months at Fischamend , a farm labor camp monitored by the Nazi SS, the couple discover a pathway into Italy. Recognizing that Italy’s fascist dictator, Mussolini is progressively consenting of Hitler’s anti-Semitic policies, they manipulate their way across the border into France. As if their emigration plight wasn’t difficult enough, it is again stalled when Kurt is arrested as an Austrian/German “foreign enemy” only days after they reach Marseille and France declares war on Germany.