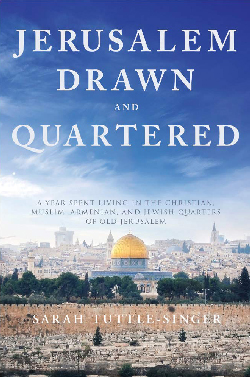 One Woman’s Year in the Heart of the Christian, Muslim, Armenian, and Jewish Quarters of Old Jerusalem

On a night in 1999 when Sarah Tuttle-Singer was barely 18, she was stoned by Palestinian kids just outside one of the gates to the Old City of Jerusalem. In the years that followed, she was terrified to explore the ancient city she so loved.

But, sick of living in fear, she has now chosen to live within the Old City’s walls, right at the heart of the four quarters: Christian, Muslim, Armenian, and Jewish.

Jerusalem’s Old City is the hottest piece of spiritual real estate in the world. For millennia empires have clashed and crumbled over this place. Today, the conflict between Israelis and Palestinians plays out daily in her streets, and the ancient stones run with blood. But it’s also an ordinary city, where people buy vegetables, and sooth colicky babies, where pipes break, where the pious get high, and young couples sneak away to kiss in the shadows.

Sarah has thrown herself into the maelstrom of living in each quarter―where time is measured in Sabbath sunsets and morning bells and calls to prayer, in stabbing attacks and check points―keeping the holidays in each quarter, buying bread from the same bread seller, making friends with people who were once her enemies, and learning some of the secrets and sharing the stories that make Jerusalem so special, and so exquisitely ordinary.

Jerusalem, Drawn and Quartered is a book for anyone who’s wondered who really lives in Israel, and how they coexist. It’s a book that skillfully weaves the personal and political, the heartwarming and the heart-stopping. It’s a book that only Sarah Tuttle-Singer can write. The Old City of Jerusalem may be set in stone, but it’s always changing―and these pages capture that.