Mort Ziff Is Not Dead by Cary Fagan 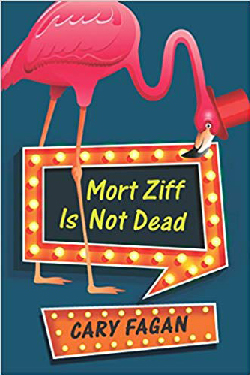 It’s the winter of 1965. Norman Fishbein is enduring not only a cold winter but also the usual torments and annoyances from his two older brothers. When Norman wins a thousand dollars in the “Count-the-Doozy-Dots Contest” his parents let him choose how to spend it, strongly suggesting a new car is what the family needs. But Norman decides what his family really needs is their first vacation that doesn’t mean camping in a tent–a trip to Miami Beach.

A snowstorm almost wrecks their plans, but in the end Norman gets his first plane ride (with both brothers air-sick on either side of him). Miami strikes him as a paradise–warm weather, palm trees, beaches, and ocean. They stay in luxury at the Royal Palm Hotel, owned by the mysterious millionaire Herbert Spitzer.

One day at the pool Norman spots an old man in a black suit, who his father tells him is a once-famous comedian named Mort Ziff. (Norman’s father thought that Mort Ziff had died years ago.) Holding onto the remains of his career, Mort Ziff is performing every night in the hotel dining room. A chance meeting begins an unusual friendship between Norman and the old comedian. But after hearing that Mort Ziff has been fired, to be replaced by “The Centipedes,” a pop group imitating the Beatles, Norman takes matters into his own hands, resolving to save Mort’s job and in the process, coming to realize an innner strength he didn’t know he had.