Strange Bird: The Albatross Press and the Third Reich by Michele K. Troy 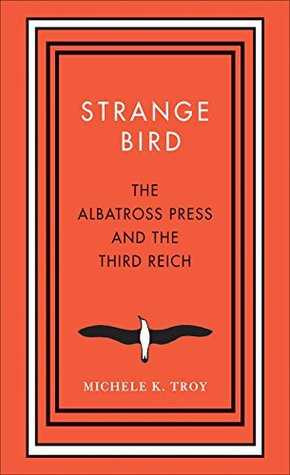 The Albatross Press was, from its beginnings in 1932, a “strange bird”: a cultural outsider to the Third Reich but an economic insider. It was funded by British-Jewish interests. Its director was rumored to work for British intelligence. A precursor to Penguin, it distributed both middlebrow fiction and works by edgier modernist authors such as D. H. Lawrence, Virginia Woolf, James Joyce, and Ernest Hemingway to eager continental readers. Yet Albatross printed and sold its paperbacks in English from the heart of Hitler’s Reich.

In her original and skillfully researched history, Michele K. Troy reveals how the Nazi regime tolerated Albatross—for both economic and propaganda gains—and how Albatross exploited its insider position to keep Anglo-American books alive under fascism. In so doing, Troy exposes the contradictions in Nazi censorship while offering an engaging detective story, a history, a nuanced analysis of men and motives, and a cautionary tale.