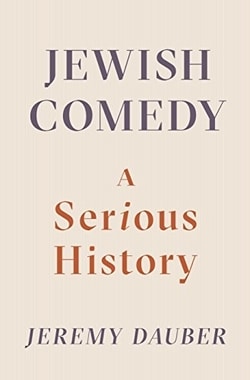 In a major work of scholarship both erudite and very funny, Columbia professor Jeremy Dauber traces the origins of Jewish comedy and its development from biblical times to the age of Twitter. Organizing the product of Jews’ comic imagination over continents and centuries into what he calls the seven strands of Jewish comedy—including the satirical, the witty, and the vulgar—he traces the ways Jewish comedy has mirrored, and sometimes even shaped, the course of Jewish history. Persecution, cultural assimilation, religious revival, diaspora, Zionism—all of these, and more, were grist for the Jewish comic mill; and Dauber’s book takes readers on the tour of the funny side of some very serious business. (And vice versa.)

In a work of dazzling scope, readers will encounter comic masterpieces here that range from Talmudic rabbi jokes to medieval skits, Yiddish satires and Borscht Belt routines to scenes from Seinfeld and Broad City, and the book of Esther to Adam Sandler’s “Hanukkah Song.” Dauber also explores the rise and fall of popular comic archetypes such as the Jewish mother, the Jewish American Princess, and the schlemiel, the schlimazel, and the schmuck, and the classic works of such masters of Jewish comedy as Sholem Aleichem, Isaac Babel, Franz Kafka, the Marx Brothers, Woody Allen, Joan Rivers, Philip Roth, Mel Brooks, Sarah Silverman, Jon Stewart, and Larry David, among many others.

Jewish comedy, as Dauber writes, is serious business. And precisely what it is, how it developed, and how its various strands weave together and in conversation with the Jewish story: that’s Jewish Comedy.