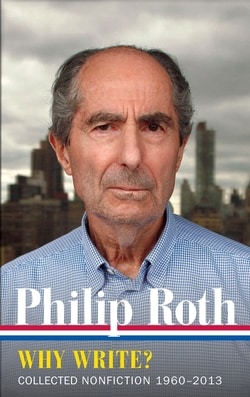 Throughout a unparalleled literary career that includes two National Book Awards (Goodbye, Columbus, 1959 and Sabbath’s Theater, 1995), the Pulitzer Prize in fiction (American Pastoral, 1997), the National Book Critics Circle Award (The Counterlife, 1986), and the National Humanities Medal (awarded by President Obama in 2011), among many other honors, Philip Roth has produced an extraordinary body of nonfiction writing on a wide range of topics: his own work and that of the writers he admires, the creative process, and the state of American culture. This work is collected for the first time in Why Write?, the tenth and final volume in the Library of America’s definitive Philip Roth edition. Here is Roth’s selection of the indispensable core of Reading Myself and Others, the entirety of the 2001 book Shop Talk, and “Explanations,” a collection of fourteen later pieces brought together here for the first time, six never before published. Among the essays gathered are “My Uchronia,” an account of the genesis of The Plot Against America, a novel grounded in the insight that “all the assurances are provisional, even here in a two-hundred-year-old democracy”; “Errata,” the unabridged version of the “Open Letter to Wikipedia” published on The New Yorker’s website in 2012 to counter the online encyclopedia’s egregious errors about his life and work; and “The Ruthless Intimacy of Fiction,” a speech delivered on the occasion of his eightieth birthday that celebrates the “refractory way of living” of Sabbath’s Theater’s Mickey Sabbath. Also included are two lengthy interviews given after Roth’s retirement, which take stock of a lifetime of work.