Beyond the Nation-State: The Zionist Political Imagination from Pinsker to Ben-Gurion by Dmitry Shumsky 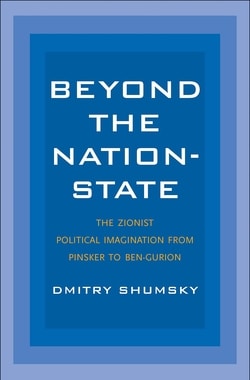 The Jewish nation-state has often been thought of as Zionism’s end goal. In this bracing history of the idea of the Jewish state in modern Zionism, from its beginnings in the late nineteenth century until the establishment of the state of Israel, Dmitry Shumsky challenges this deeply rooted assumption. In doing so, he complicates the narrative of the Zionist quest for full sovereignty, provocatively showing how and why the leaders of the pre-state Zionist movement imagined, articulated and promoted theories of self-determination in Palestine either as part of a multinational Ottoman state (1882-1917), or in the framework of multinational democracy.

In particular, Shumsky focuses on the writings and policies of five key Zionist leaders from the Habsburg and Russian empires in central and eastern Europe in the late nineteenth and early twentieth centuries: Leon Pinsker, Theodor Herzl, Ahad Ha’am, Ze’ev Jabotinsky, and David Ben-Gurion to offer a very pointed critique of Zionist historiography.