G-d Versus Gods: Judaism in the Age of Idolatry by Rabbi Reuven Chaim Klein 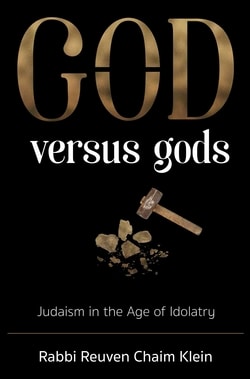 God versus Gods: Judaism in the Age of Idolatry seeks to understand the Bible’s accounts of polytheism, follows its history, and focuses on the struggle between Jewish Monotheism and pagan/idolatrous cults in the Biblical period. An extended section is devoted to understanding the Talmudic concept concerning the paradigm shift which emptied the world of the Evil Inclination for Avodah Zarah, and its implications from a religious perspective.

This unique work delves into the Bible’s view of the history of idolatry, as well as the hermeneutical, philological, Kabbalistic, and Halachic approaches to this topic taken by various Rabbinic figures through the ages. The second part of this book consists of an encyclopedia that lists and elaborates upon ever foreign deity mentioned in the Bible. The author also compares and contrasts traditional Jewish views to those of modern-day academia (addressing archeology and philology of the Levant), offering proofs and difficulties to both approaches.

As the old saying goes, “Two Jews, three opinions.” In almost every chapter, more than one way of looking at the matter at hand is presented. In some cases, the differing opinions can be harmonized, but ultimately many matters remain subject to dispute. Hopefully, the mere knowledge of these sources will whet the reader’s intellectual curiosity to learn more.

Written by a brilliant young scholar, God versus Gods: Judaism in the Age of Idolatry is ground-breaking, intriguing, and remarkable.