Gender, Kabbalah, and the Reformation: The Mystical Theology of Guillaume Postel, (1510-1581) by Yvonne Petry 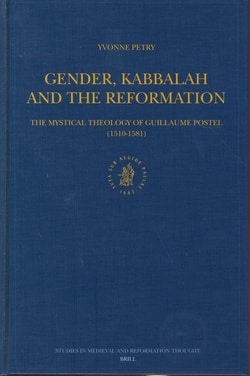 This study examines one of the most unusual figures of the sixteenth century, Guillaume Postel, who believed that a female messiah had arrived on earth who would usher in a new age of political and religious harmony. He grounded this prophecy in the Kabbalah, the Jewish mystical tradition, and relied extensively on its use of gender symbolism. Postel has often been viewed as a marginal figure, whose unconventional views preclude comparison with his contemporaries. However, this study suggests that Postel used his prophecy to participate in two arenas: Reformation controversy and the querelle des femmes or debate about women. His thought has relevance not only for an understanding of Renaissance Kabbalah, but for Reformation history and for early modern gender studies.