Prophetic Inspiration After the Prophets: Maimonides and Other Medieval Authorities by Abraham Joshua Heschel 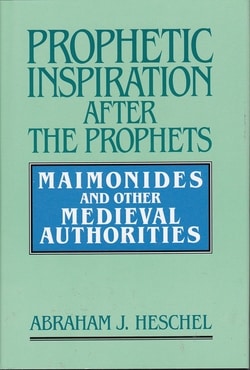 General readers are likely to find this scholarly work challenging, but those who persevere will be rewarded with greater insight into the sources and ideas of one of the most important voices for peace and justice of the twentieth century. Heschel embodied the connection between mysticism and activism in his own life, but he was best known and has been most often remembered as a tireless champion of civil rights. This volume contains English translations of two essays originally published in Hebrew that focus on prophetic inspiration in medieval Judaism. Their publication is a valuable contribution to the ongoing discovery of Heschel as scholar and mystic. The second essay is equally important for its insight into both Maimonides and Heschel. This book will appeal to readers with an interest in the medieval period, mysticism, Maimonides, or Heschel–as well as those who seek exemplars of prophetic action deeply grounded in both tradition and scholarship.