Six Thousand Miles to Home: A Novel Inspired by a True Story of World War II by Kim Dana Kupperman 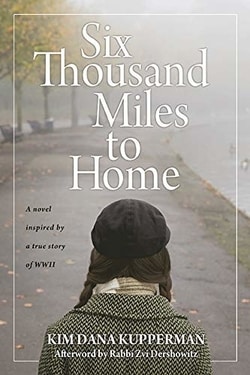 In 1939, Hitler’s tyranny approaches western Poland. A prosperous Jewish family–Julius and Josefina Kohn and their two teenaged children, Peter and Suzanna–flee their homeland, embarking on an unexpected odyssey of six-thousand arduous miles. They evade Nazi capture, only to be arrested by the Soviets, who have invaded Poland from the east.

Deported to northern Russia, they endure savage conditions during eighteen months of forced labor in a prison camp, where death lurks around every corner. When Hitler breaks a secret pact with Stalin, and the Nazis invade the USSR, the release of Polish prisoners in the Soviet Gulag is negotiated. The Kohn family’s journey continues, from Russia to Central Asia and across the Caspian Sea to Persia. Now in a foreign land as impoverished refugees, their hometown occupied by the Nazis, and their relations, friends, and neighbors displaced across the world, can they discover generosity, hope, and even love in Tehran?

From award-winning author Kim Dana Kupperman, this dramatic novel, inspired by a true story, occurs during one of the Holocaust’s lesser-known episodes, the deportation into the Soviet Gulag of 1.5-2 million Polish citizens at the start of World War II.