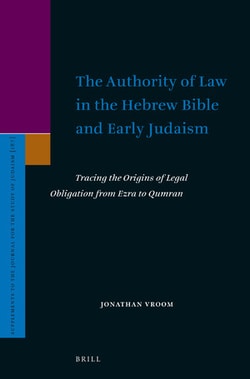 Tracing the Origins of Legal Obligation from Ezra to Qumran

In The Authority of Law in the Hebrew Bible and Early Judaism, Vroom identifies a development in the authority of written law that took place in early Judaism. Ever since Assyriologists began to recognize that the Mesopotamian law collections did not function as law codes do today—as a source of binding obligation—scholars have grappled with the question of when the Pentateuchal legal corpora came to be treated as legally binding. Vroom draws from legal theory to provide a theoretical framework for understanding the nature of legal authority, and develops a methodology for identifying instances in which legal texts were treated as binding law by ancient interpreters. This method is applied to a selection of legal-interpretive texts: Ezra-Nehemiah, Temple Scroll, the Qumran rule texts, and the Samaritan Pentateuch.