Defining Israel: The Jewish State, Democracy, and the Law by Simon Rabinovitch 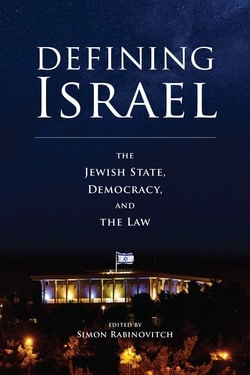 Defining Israel: The Jewish State, Democracy, and the Law is the first book in any language devoted to the controversial efforts in Israel’s parliament to pass a “nation-state law.” Israel has no constitution, and although it calls itself the Jewish state there is no agreement among Israelis on how that fact should be reflected in the government’s laws or by its courts. Since the 1990s civil society groups and legislators have drafted constitutions and proposed Basic Laws with constitutional standing that would clarify what it means for Israel to be a “Jewish and democratic state.”

Are these bills Liberal or chauvinist? Are they a defense of the Knesset or an attack on the independence of the courts? Is their intention democratic or anti-democratic? The fight over the nation-state law-whether to have one and what should be in it-toppled the 19th Knesset’s governing coalition and continues until today as a point of contention among Israel’s lawmakers. Defining Israel brings together influential scholars, journalists, and politicians, observers and participants, opponents and proponents, Jews and Arabs, all debating the merits and meaning of Israel’s proposed nation-state laws. Together with translations of each draft law and other key documents, the essays and sources in Defining Israel are essential to understand the ongoing debate over what it means for Israel to be a Jewish and democratic state.