God Is In the Crowd: Twenty-First Century Judaism by Tal Keinan 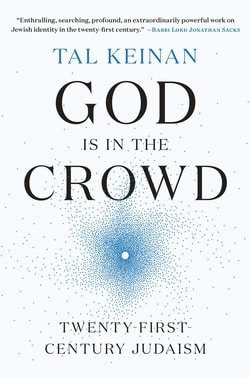 God Is in the Crowd is an original and provocative blueprint for Judaism in the twenty-first century. Presented through the lens of Tal Keinan’s unusual personal story, it a sobering analysis of the threat to Jewish continuity. As the Jewish people has become concentrated in just two hubs—America and Israel—it has lost the subtle code of governance that endowed Judaism with dynamism and relevance in the age of Diaspora. This code, as Keinan explains, is derived from Francis Galton’s “wisdom of crowds,” in which a group’s collective intelligence, memory, and even spirituality can be dramatically different from, and often stronger than, that of any individual member’s. He argues that without this code, this ancient people—and the civilization that it spawned—will soon be extinct. Finally, Keinan puts forward a bold and original plan to rewrite the Jewish code, proposing a new model for Judaism and for community in general.

Keinan was born to a secular Jewish family in Florida. His interest in Judaism was ignited by a Christian minister at his New England prep school and led him down the unlikely path to enlistment in the Israel Air Force. Using his own dramatic experiences as a backdrop, and applying lessons from his life as a business leader and social activist, Keinan takes the reader on a riveting adventure, weaving between past, present, and future, and fusing narrative with theory to demonstrate Judaism’s value to humanity and chart its path into the future.