Sweep: The Story of a Girl and Her Monster by Jonathan Auxier 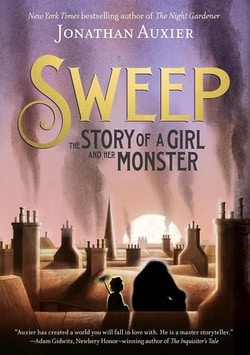 It’s been five years since the Sweep disappeared. Orphaned and alone, Nan Sparrow had no other choice but to work for a ruthless chimney sweep named Wilkie Crudd. She spends her days sweeping out chimneys. The job is dangerous and thankless, but with her wits and will, Nan has managed to beat the deadly odds time and time again.

When Nan gets stuck in a chimney fire, she fears the end has come. Instead, she wakes to find herself unharmed in an abandoned attic. And she is not alone. Huddled in the corner is a mysterious creature—a golem—made from soot and ash.

Sweep is the story of a girl and her monster. Together, these two outcasts carve out a new life—saving each other in the process. Lyrically told by one of today’s most powerful storytellers, Sweep is a heartrending adventure about the everlasting gifts of friendship and wonder.