When Paul Met Artie: The Story of Simon & Garfunkel by G. Neri 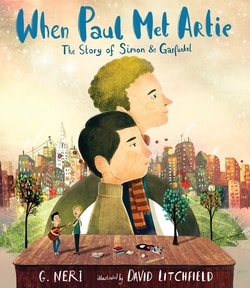 From childhood friendship to brief teenage stardom, from early failures to musical greatness — the incredible story of how Simon & Garfunkel became a cherished voice of their generation.

Long before they became one of the most beloved and successful duos of all time, Paul Simon and Art Garfunkel were just two kids growing up in Queens, New York — best friends who met in a sixth-grade production of Alice in Wonderland and bonded over girls, baseball, and rock ’n’ roll. As teens, they practiced singing into a tape recorder, building harmonies that blended their now-famous voices until they sounded just right. They wrote songs together, pursued big-time music producers, and dreamed of becoming stars, never imagining how far their music would take them. Against a backdrop of street-corner doo-wop gangs, the electrifying beginnings of rock ’n’ roll, and the rise of the counterculture folk music scene, G. Neri and David Litchfield chronicle the path that led two young boys from Queens to teenage stardom and back to obscurity, before finding their own true voices and captivating the world with their talent. Back matter includes an afterword, a discography, a bibliography, and a fascinating list of song influences.