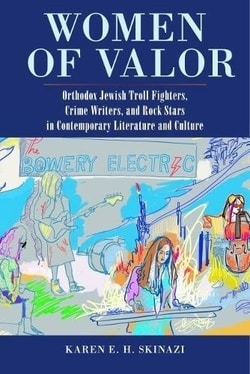 Media portrayals of Orthodox Jewish women frequently depict powerless, silent individuals who are at best naive to live an Orthodox lifestyle, and who are at worst, coerced into it. Karen E. H. Skinazi delves beyond this stereotype in Women of Valor to identify a powerful tradition of feminist literary portrayals of Orthodox women, often created by Orthodox women themselves. She examines Orthodox women as they appear in memoirs, comics, novels, and movies, and speaks with the authors, filmmakers, and musicians who create these representations. Throughout the work, Skinazi threads lines from the poem “Eshes Chayil,” the Biblical description of an Orthodox “Woman of Valor.” This proverb unites Orthodoxy and feminism in a complex relationship, where Orthodox women continuously question, challenge, and negotiate Orthodox and feminist values. Ultimately, these women create paths that unite their work, passions, and families under the framework of an “Eshes Chayil,” a woman who situates religious conviction within her own power.