A Father’s Story: My Fight for Justice Against Iranian Terror by Stephen M. Flatow 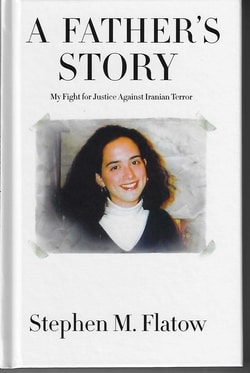 Stephen M. Flatow was “just a real estate lawyer in New Jersey,” until the events of April 9, 1995 changed his life forever. That day, Flatow learned that his daughter Alisa, a twenty-year-old college student traveling in Israel, had been the victim of a terrorist bus-bombing in Gaza. After he discovered the Iranian government had directly sponsored the suicide bomber, by sponsoring Islamic Jihad, Flatow decided to sue the terror state. It was not to be futile: Flatow, working with an astute Washington lawyer and a forensic researcher, not only won a dramatic verdict against Iran, but collected a huge judgment. Stephen M. Flatow explains how Alisa changed the family’s religious life at an early age, eventually making six trips to Israel by the time she was killed. Alisa was an honors student at Brandeis University. This is the story of a brave father’s determination to bring his daughter’s murderers to justice through the American justice system. Encountering one roadblock after another, Flatow persisted, even challenging the president of the United States in his quest. “I’m still Alisa’s father,” he told Bill Clinton-as Clinton and his aides tried to thwart Flatow’s lawsuit. With the help of Senators Frank Lautenberg and Connie Mack, Flatow’s case advanced. In the end, the man who was once “just a real estate lawyer from New Jersey” succeeded in a U. S. District courtroom- against the longest of odds. This book is the story of that lengthy fight for justice. Free shipping within U.S.

“As a member of the U.S. Senate, I witnessed first-hand Stephen M. Flatow’s battles as he sought to hold his daughter’s murderers liable for her death. A Father’s Story is a gripping memoir.”– Former Senator Joseph I. Lieberman.