‘Slay them not’: Twelfth-Century Christian-Jewish relations and the Glossed Psalms Series by Linda M.A. Stone 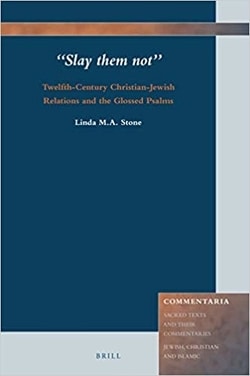 Linda Stone’s analysis of the anti-Jewish polemic present in three closely-linked twelfth-century Psalms glosses brings a new source to the study of medieval Christian-Jewish relations. She reveals how its presence, within the parva, media and magna glosses compiled respectively, by Anselm of Laon, Gilbert of Poitiers and Peter Lombard, illuminates the various societal challenges facing the twelfth-century Church. She shows that, rather than a twelfth-century phenomenon, using such anti-Jewish terminology in Christian Psalms exegesis was a long-standing reflection of Christianity’s ambivalence towards Judaism. Moreover, demonstrating how her analysis of anti-Jewish terminology unravelled the Psalm glosses’ textual relationships, she suggests that analysis of its presence in other glossed books of the Bible could offer a further resource for uncovering their complexities.